Stuck In a traffic jam? Take the next right to TwitterVille ! 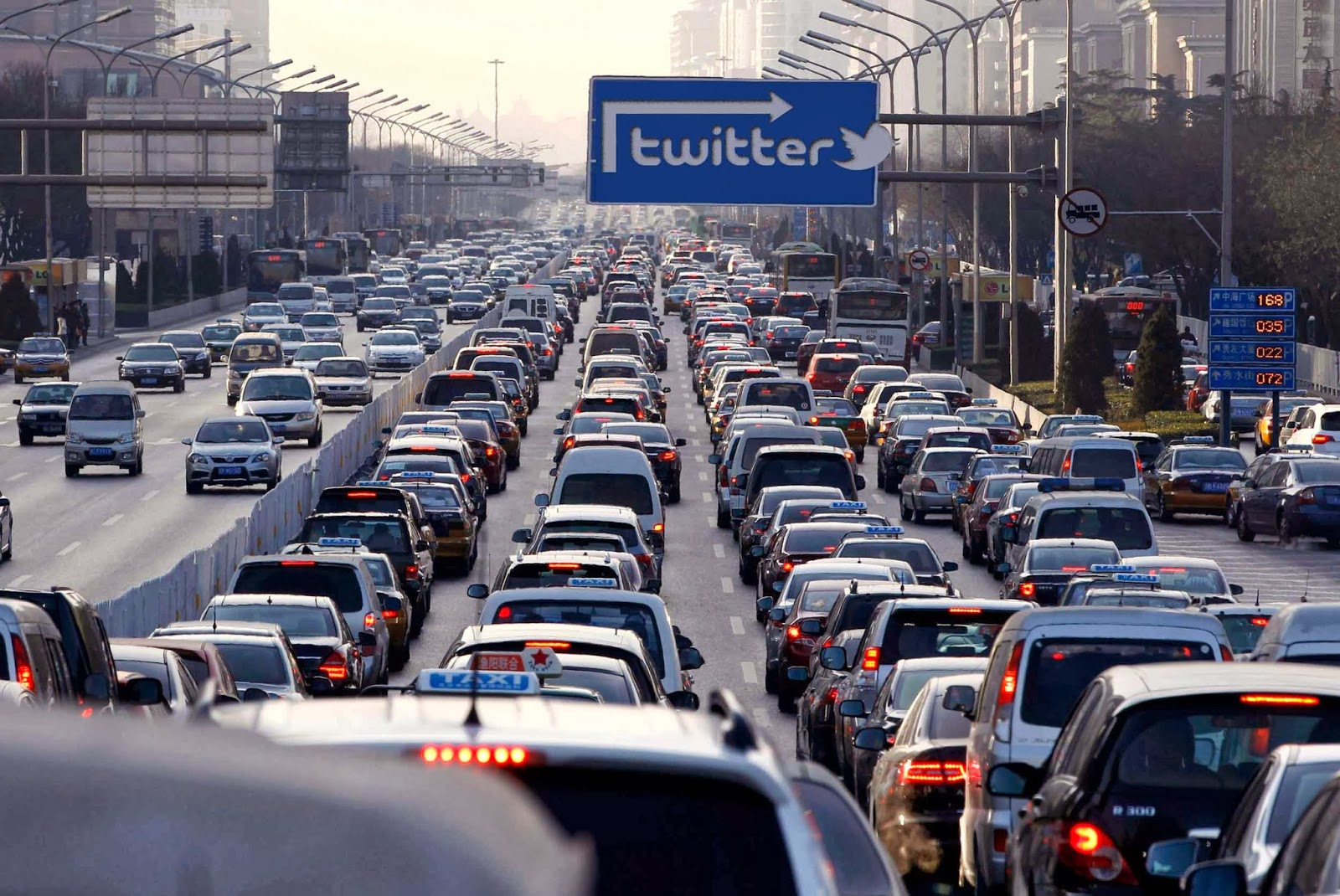 Noida to Delhi travel in general is no cake walk, but yesterday was special. A five-hour standoff at the Delhi-UP border between police and protesters turned the arterial NH-24 into a traffic nightmare, with commuters stuck in jams for up to six hours from around 3pm till late at night.  The Traffic was moving at snail's pace all through and to top it all, police diverted the traffic to the already crowded Ghaziabad roads.
My first reaction was why am I getting subjected to this new kind of mayhem. I  called up my home wanting to check on what had happened, but there was no news. Yeah, I CALLED while 'driving' (if that's what you call sitting in the car on a road where no traffic is actually moving and all you can hear is the loud horns of the cars).

The news channels, too busy with their regular political bullsh*t had completely failed to capture this. Generally, the radio guys are pretty quick to get this news and broadcast it, but somehow they were only able to tell what the situation was, after I was already in the middle of the jam that stretched at least for a few kilometers. So no useful information there.

I was completely clueless as Ghaziabad was a new kind of traffic jungle for me and even the Google Maps App was turning to be less than useful in this situation. It was showing me that i will reach my destination within 50 minutes if I followed a particular route. Oh I wished I could but knew it could only happen if my car could fly.

It then struck me to check on twitter, and maybe any other person has written about the traffic jam and it would be a good to empathize.   Little did I know that it will turn out to be a real savior for the day for me.

It started with.. @tarique_anwer ’s tweet :
'God save people from Noida-Delhi border traffic jam. Pathetic.' and then a crack at the Radio Jockeys sitting in their spanky offices joking about the Jam by @neerjagurnani
'No, RJ, the weather is not "sexy" if one has to commute from Delhi to Noida amidst the slush and traffic -_-' . It had already started to be amusing, even in the traffic jam. Also, this strange human psychology behavior had kicked in, the one where it makes you feel a little less sad to know that you are not the only one in this mess and you have over 8 km long stretch of traffic experiencing the same plight.

Then came a tweet from ‏@iDahele :
'Just heard that there have been some kind of riots at UP gate. #NewDelhi #Delhi #Noida' and we knew the reason for jam and diversion.
There was no solution, no respite from the problem i was in. The honking at the Gazipur road had now become rhythemic to my ears, a rhythm yes, enjoyable? not at all.

I then came across this service run from twitter itself, Traffline Delhi. Through the below tweets reconfirming my situation. 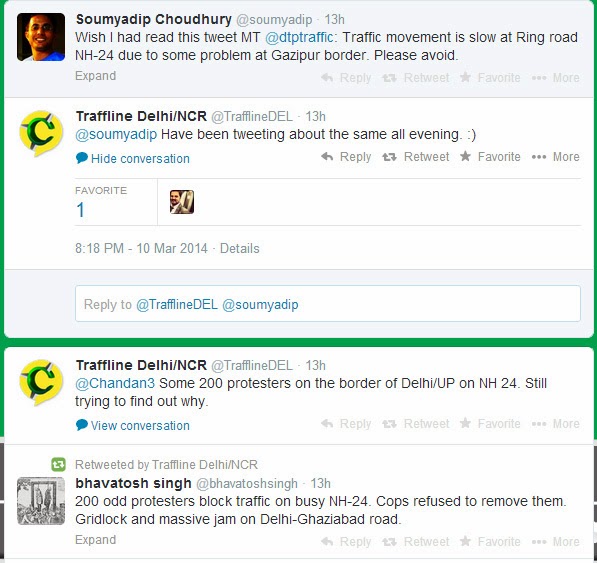 Something about the service told me that i should check  more of their tweets. and found that this was all I needed, to get out of this hell.  A little scroll down gave me this and all my problems were on the brink of getting solved. 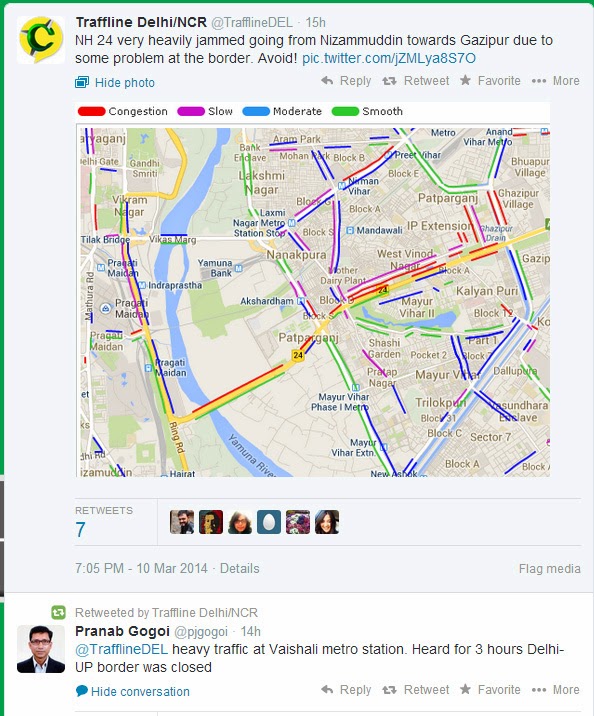 I took the next turn and according to the map continued towards my destination and finally entered Delhi. The Tweets continued and I discovered that they were having an app which I downloaded instantaneously. 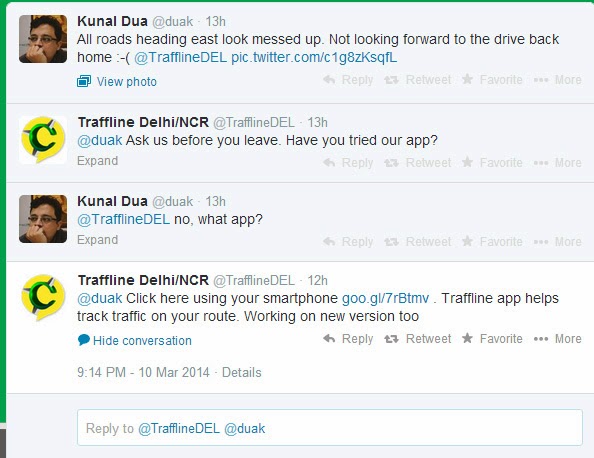 The App is not as beautiful as you would want it to be, but believe me, it gets the job done and I am already a fan.
Soon, i was able to reach home, in time for dinner where an awesome hot Pasta awaited me.
Thank You @duak, @soumyadip, @pjgogoi and everyone else who were able to lead me to the savior  of the day TrafflineDEL.
And a bow to you TrafflineDEL to give a new meaning to ‘Follow me’ on twitter.